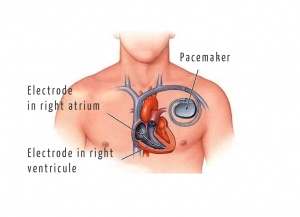 Cardiostimulator (pacemaker) is a medical device that records the rhythm of the heartbeats and generates electrical impulses that are conducted to the heart and cause its normal contractions. Operations for the implantation of pacemakers are indicated in pathologies accompanied by insufficiently frequent contractions of the chambers of the heart, which can not fully ensure normal blood circulation and vital activity of the human body.

Previously cardiosurgeons used devises that did not respond to the own heart rhythm and worked with the impulse generation frequency set during their implantation. This significantly limited the possibilities of their application and did not always ensure the achievement of the necessary therapeutic effect. Thanks to the development of the medical equipment industry, devices, resembling the harmonious operation of the minicomputer and synchronizing the normal contraction of the atria and ventricles, can now be used.

The pacemaker’s chip constantly performs an analysis of heart-generated impulses, conducts impulses, generated by the pacemaker, to the heart wall and controls their synchronization. Electrode, which is a conductor, transmits the impulse generated by the device to the heart chamber and carries back to the microchip the information on the activity of the heart itself. At the end of each electrode-conductor there is a metal head that makes contact of the electrode with this or that part of the heart "reads" information about the electrical activity of the heart and sends impulses only when it need it.

Models of pacemakers with a built-in cardioverter defibrillator are programmed to automatically turn on cardioversion and defibrillation and begin to generate a high-voltage impulse when the device receives data on ventricular fibrillation or life-threatening tachycardias.